At 4, a friend is your partner during playtime.

At 7, a friend is someone who plays zero point and five stones with you.

At 10, a friend is someone who lends you correction tape without grumbling and buys raspberry ripple with you from the ice cream man.

At 12, you think that you’ll keep in close contact with your friend after going to different secondary schools, but usually no, because you only had each other’s house numbers back then.

At 14, you already had formed a clique of friends, but soon you have to part again due to bloody streaming.

At 15, you start to loiter at malls after school hours; carry sharp combs and tuck out shirts together ‘cos you think it’s cool. You had your first puppy love; then you cry your heart out on your friend’s shoulder after being dumped by your self-proclaimed “first love”. You cheer your friend up by writing sweet notes and buying her chocolates.

At 16, you call someone your best friend and become really possessive; you get jealous when she chooses other friends over you. But still, you go for recesses tgt; you study hard for the ‘O’ levels tgt; you play basketball tgt. You go to prom night, graduate, and look for odd jobs tgt. You shop at Bugis Street and buy the same tops and bags. You want to look like your best friend.

At 17, you are thrown to a brand new environment and there, you meet new cool friends. But people always say that secondary school friends are the ones who will stay, so you’re still pretty close in contact. Then a guy comes along and robs you of your best friend. She is everything about her new boy. You are lost.

At 18, the jerk left your friend heartbroken. You gave your utmost comfort and support. Your friend realizes that she had been a fool and so you two were close again, or even closer. You drink to your heart’s content and prolly went clubbing to divert the heartache.

At 19, you graduate from poly and you’re lost again. You prolly went on a getaway with your friends before starting your first job.

At 20, you are officially in the working society and then everything changes. Not feelings but your schedule. It gets so busy that you count yourself lucky if you’re able to meet your friends once per week. You chill, gossip, cam whore. Got attached but friends still hold an important position in your heart. Life’s great.

At 21, you dread being 21, but c’mon, what’s life without partying? You party, you drink, and you party. You prolly got grinded by some random guys in the club, but it was nothing compared to the stories which you hear everywhere. Liars, two-timers, even fcuk buddies. You get a surprise of the century knowing that some friends are guilty ones too.

At 22, you prolly had made more new friends over the years, but you realised that people still come and go. You stop putting in efforts to every other friendships, and only stayed close to your closest. But you tend to think a lot and get emo very often so you shut yourself up. You don’t see the need for a listening ear so you rant on Twitter / Facebook / your blog. You get concerned friends asking but you always say you are okay simply because it’s an easier way out.

You told another friend that once upon a time, you were willing to sacrifice your life for a best friend but now you do not know. Nobody is indispensable anyway. Your best friend enters a quarter-life crisis. You want to be there but you don’t feel needed. You no longer understand. You are jaded. But it’s uncool to be emo so you put on a false front. You smile. She smiles back 🙂

And I know I’m a bit slow, but I just scanned through a few short clips of Jay Chou’s self-directed 偶像剧.

I heard it was a flop. I can see why. The title already fail. 熊貓人 (Pandamen) -_- It’s about some superheroes clad in panda suits. Jay Chou is the lead cop, but not the lead character. Hahaha no wonder fail. ‘Cos people like me want to see him leh, not some lame pandas.

McDonald’s spicy nuggets are quite nice. I like. But my flu and sore throat now is killing me. I can sense a slight fever coming soon. *Drowns self in cooling water D:

Want to sleep but I feel like chionging my portfolio. I’m only done with two pages in PSDs. Slow like tortoise. And I swear I’m my worst client, EVER. “Can you shift this 10 pixels up?” “Let’s try this in pink.” “Ermmm… I don’t really know what I want.” “Can you make this pop up? It seems a lil’ too flat.”

Spotted a condo at Kovan a while ago, and their tagline was, “It’s so Kovanient.” TAGLINE FAIL. Wahaha Meiting and I can laugh over it for ages.

Back to Kovan. Meiting the ‘East-sider’ misses the Thai food so we’re back at Nakhon Kitchen once again. I’m like becoming a super regular but funny how I can never get sick of the food there.

Oh, Yuling bought a new pen camera! It has quite a handful of functions which she hasn’t really figure out so we tested it for her.

The vignetting effect. Check out the queue outside the restaurant. Never fails to have one, every single time.

Sketchy effect. Hah this one is our fave! ‘Cos it makes all of us look damn chio.

We never cam whore la. We test camera only. HAHAH.

Jay Chou’s concert last night was a blast! More than a blast! OMFG dunno how to describe. He’s God. Updates when I get the photos from Lion. Mine are all small and blurry zzz. Time for a new cam man.

Wasn’t the best tanning session though. The sun was so temperamental. Argh I need to find a blardee sunny day to bake myself brown again.

Photo Shoot for a Good Cause

We cross-dressed. Sorta. I didn’t wear my wig properly 🙁

The surprise wouldn’t have happened without Yun’s help ‘cos my oven suddenly broke down on the day of baking. Super suay I almost wanted to cry D:

Brought Sil out for dinner the next day.

Found this nice rooftop bar at The Screening Room and we loved it! The view the food and everything else was fab. Only that it gets kinda flooded by ang mohs at night.

Photo taken by Sil. I didn’t even noticed such pretty grasses(?) around us.

Our friendship sparked off a year ago over sharing some food, and we’re still doing it on her birthday lol.

The Boy in Me

I’m actually happy with the boyish look. You know since young, I’ve always wished that I was born a boy. I wanted to be a boy so badly that I tucked all my hair in a cap; I only wore T-shirt and pants; I even dreamt of myself peeing with a ‘kukubird’ and told my mum that I want to be ‘黄飞鸿’ when I grow up.

The desire of becoming a boy slowly died off when I started trying on skirts during secondary school. I thought by now, this desire would have died off completely, but no. It is innate.

I still want to be the ‘man’ among my girlfriends – help them carry bags hold the door and stuffs. Lol. But luckily, when I’m with my boyfie, I’ll leave the ‘man’ part to him. So I think I’m still pretty normal eh?

For the outside air, and outside food.

Been recuperating at home for the past few days, and the moment I am out with my friends, I want to chiong every single food I see.

Look, the polo bun is smiling at me.

See food already look spastic. Haha I can never savour good food quietly. “Wah” and “mmm” and “shiok!” are three common noises coming out of my mouth constantly as I nom.

记得吃 > Ah Chew Desserts. Meiting is now a convert and had since stopped dragging me and Yuling to Ah Chew.

And damn, my robot is officially lame 🙁

Would you rather see pretty pictures or know the cold hard truth?

There’s so much to consider before telling someone something. And by choosing not to tell does not imply that one is lying – I just chose not to tell. I know this topic will forever be an endless debate, but to each of its own, I believe that “ignorance is bliss” is true to a certain extent. (WALAU, you think social studies meh. True to a certain extent -_-)

ANYHOWS, the truth also includes criticisms which I think I can take pretty well. In fact, I kinda like criticisms ‘cos it makes me wanna do things better to shut your fcking mouth up, ever.

I Never Knew My Toes were Gorgeous

Haw haw! Not that they literally are, but they just were when I could see them clearly the moment I wake up. IT’S MAGIC.

Had my cornea operated on Monday and it was a huge success though I could barely open my eyes on the first day. Everything was good and getting better from day two onwards.

LOL this is what I have to wear to sleep every night in case I accidentally rub my eyes. And I have to keep dripping urine and milk looking eye drops on a hourly basis if not my eyeballs will wither and die.

Anyway, everyone was so nice. The text messages, company, home visits, even twitter replies. AWWWW, appreciated them really!

Jan and I before the surgery. Totally needed the cam whoring to digress.

BAH. I was still mad tense during the surgery. But the doctor’s reassurance was surely necessary and everything was over in a blink of eye. Lots of blinks, rather.

And for those who have been asking and/or about to ask, I did my lasik at Shinagawa @ Wheelock Place and it cost me a total of <$3.2K. Totally worth every cent I would say. Investment on yourself can't be scrimped. And for those who are interested to know how it's done, I'll tell you in person. But if you're not my friend, then watch this video. 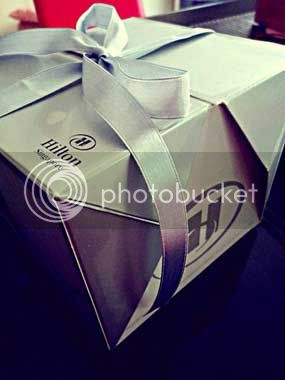 Oh, the way to cheer a half-blind gluttony patient up is to buy him/her delicious Hilton cheesecakes! Baby you sure know the way to my stomach MUAHAHA.