Thanks to Golden Village and omy, I’ve gotten a pair of tickets to the British comedy, The Inbetweeners.

It’s all about a “lads’ holiday” among four socially inept teenage boys in Malia, Greece – when one of the them got ditched by his girlfriend. And we all know what kind of getaway four 18-year-olds could be lusting after, “Two weeks of sun, sea, sex, sand, booze, sex, minge, fanny and tits. And booze. And Sex.”

However, the reality wasn’t anything close to that. It was made up of tragedy, humiliation, doomed and drunken pursuits of the female gender, dodgy dance moves and a dilapidated dorm.

My favourite scene is when the lads strode into the airport in slow motion wearing the same T-shirts with rock music in the background (like a typical Hollywood scene) but then the music came crashing down when they were told that their flight had been delayed for seven hours, and to take off their shirts. LOL.

It was a love-hate relationship with these bunch of losers, as they send you cackling with their crude humour.

A lil’ research revealed that this movie was actually a continuation of The Inbetweeners TV series. Fret not if you hadn’t watch the series before, ‘cos I didn’t, and I enjoyed it nonetheless.

Honestly, the movie was more mortal than immortal. And honestly, I don’t have a clue about Greek mythology.

I replied “yes” to the preview simply because boyfriend was into Greek gods and I was into visuals and muscles. As bimbotic as I sound, guess who I bump into at the screening? 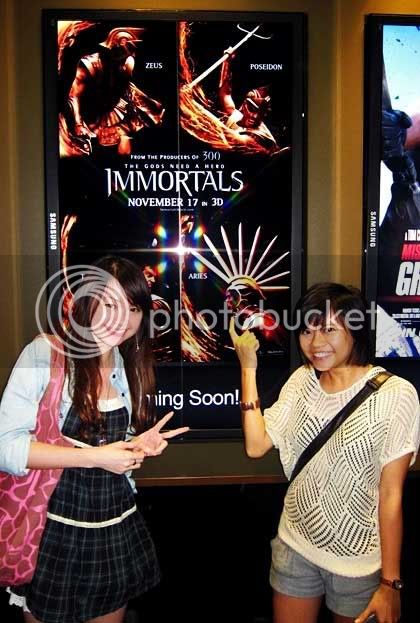 Cousin Peimin! She was also there with her boyfriend with probably the same reason, so I presume I’m not alone! :\

Anyway, post-movie discussion led us to conclude that Immortals lack a good storyline but is drop dead gorgeous in visuals. A quick lookup on the Twelve Olympians also reveals the historical inaccuracy of the film, because they only showed us six. I have no problems with that though. Like I said, I was solely in for an action adventure ride and Immortals didn’t disappoint. Jam packed with daredevil stunts and state-of-the-art effects enhanced in 3D, there were more than enough justification for the ticket price.

As quoted from the producers of 300 and Immortals, “We’re not playing it safe. History is not safe. Mythology is not safe. And we’re really not interested in safe.”

Thanks to United International Pictures (UIP) and omy once again for the tickets! Check out Immortals’ official site now.

Laugh at the Face of Danger

I grew up watching Mr. Bean’s shows, and I believe that a lot of you, like me, also got to know Rowan Atkinson through Mr. Bean. So naturally, I was instantly drawn to this show when I knew it was coming. Thanks to United International Pictures (UIP) and omy, I got a pair of tickets to the preview!

This time, Rowan Atkinson plays the role of a improbable secret agent who is obviously oblivious of fear or danger (read: stupid). Watch him as he goes on a mission to stop a group of international assassins before they eliminate a world leader and cause global chaos.

It is a comedy spy-thriller jam-packed with Rowan Atkinson’s classic humour, action, high technology, wee bit of romance, and more humour. This guy is just so capable of making you laugh even at the most tensed moments.

If you’re looking for something lighthearted this week, don’t miss Johnny English Reborn!

I can, just because it rhymes.

Was having pretty low expectations of Bridesmaids but turns out it was one of the best comedies that I’ve seen this year. Kinda average plot with INSANE HUMOUR LEVEL. Never was there a moment during the movie where I felt bored, and never was there a chance for my best friend to doze off (because she can even fall asleep watching Transformers).

Perfect show for a movie date with your girlfriends, or even boyfriends. I swear I could hear the roaring laughters of the two guys beside me the whole time. And it’s not really just about humour, there are also meaningful elements of love, life, and friendship which I like.

Thanks to Shaw and omy for the tickets!

Got awesome invites to an awesome movie through omy!!

Sayyy what! The almighty clumsy kung-fu-full greedy Dragon Warrior has returned, with double the action, spastic humour, AND touchingness.

Brought Jan, my best friend, along with me; she’s not a fan of animated films and she has never watched Kung Fu Panda before, but she totally enjoyed it without falling asleep. (Because she sleeps in every 3 out of 5 movies that I watch with her LOL.) So it means that if you already liked part 1 to begin with, you’re in for a treat.

My favourite character in the show! I’ve always had a thing for tigers since young because of their ferocity yet elegance, so it’s hard not to fall in love the “Tigress” here with the kind of agility and wittiness she possesses. Moreover, her voice’s dubbed by Angelina Jolie.

I ain’t gonna give any spoilers la. I think you should catch it yourself for optimum pleasure. Erm, I mean enjoyment! You can visit their official kung fu site for the trailer and more insights though.

No, not the wannabe pirate like this. Not the evil terrorising kind of pirates in real life either.. but the candid rugged Jack Sparrow-ish kind of pirate. (I also like The Pirate Bay kinda pirate.)

Hahaha he behaves as if he’s drunk all the time. Johnny Depp is just.. brilliant.

Which leads us to the long awaited sequel of Pirates of the Carribean: On Stranger Tides.

Aye I’ve watched all the previous three Pirates of the Carribean movies, and I must catch this!

If you’re a fan too, good news!

Because now you can simply jump on-board the Queen Anne’s Revenge and complete the “All Aboard” contest and win Gala Premiere Tickets and movie merchandise.

Besides that, you can also watch / play / download / have fun with stuffs related to the movie.

My favourite one is – Pirate Yourself.

Found the perfect photo of myself dressing up in a “pirate themed dinner” during my company trip and I started to mess around a bit. You can add wigs / accessories / scars / whatever.

This is the final outcome and I love it! Wicked pirated Facebook app 😉

Catch Pirates of the Caribbean: On Stranger Tides movie starting from 19th May 2011 and join the official Disney Studios Singapore Facebook & Twitter page!

I’ll put a bullet through your head.

Wake Up. Get Job. Find Love.

Attended my first movie preview screening with omy for the first time. Was pretty excited when I learnt that the movie I’m catching was written by the same screenwriter of ‘The Devil Wears Prada’ and ’27 Dresses’.

The storyline revolves around Becky (Rachel McAdams) and her career since the day she got fired to eventually reviving a dying news show at her new job. The obstacles she met, her love life, and the way she dealt with this “3rd worst person in the world” as her TV anchor were hilarious, but it did get a lil’ dry in some point of time.

Partly why I enjoyed the movie is also because Becky is almost like the exaggerating version of me in terms of her jittery behavior, as quoted by my best friend.

The overall flow of the film was smooth and humour was sweet, but there isn’t much climax though. However, if you fancied ‘The Devil Wears Prada’, you’d most probably like ‘Morning Glory’.

I know I sound like a total bimbo but IDC! Can’t help being drawn to talented men wahahaa.

I did mentioned about making it to the finals of the Green Hornet Side-Kick Contest.

But nope, even with faces looking tough like that, we didn’t win D:

(If I win hor, you wouldn’t only be reading this entry two weeks after the competition.)

Anyhows, it was still quite an experience throwing face publicly on stage at Bugis Junction. END_OF_DOCUMENT_TOKEN_TO_BE_REPLACED